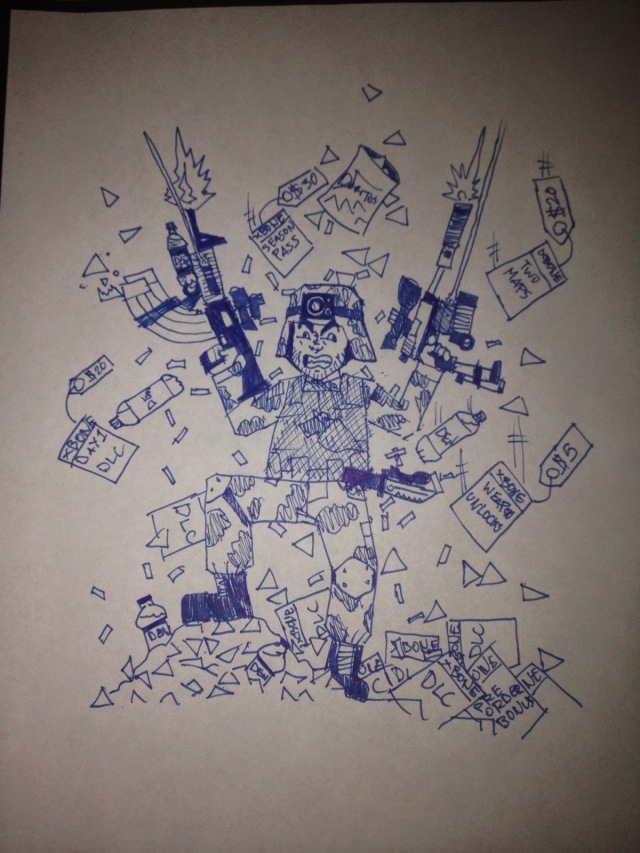 I feel as though the title says it all; Call of Duty has seriously damaged the integrity of video games.

As a former fan of the series, I have to say I loved Call of Duty: World At War. The World War II atmosphere, the brutality of combat, the feel of the weapons, all of it combined to be an immersive and amazing game. Because it was based in reality.

Recent additions to the Call of Duty series are based in modern, near-future time periods that detract from the atmosphere of the game. The storylines are bland and predictable, chock full of through-the-door slow motion that was cool in the first game, but has long-since gone stale.

I first noticed my complete hatred for the Call of Duty series when I began playing Call of Duty: Black Ops 2. I was a huge fan of the Nazi Zombies mode in both World at War and Black Ops. I loved the frantic survival, the pulse pounding action, the old school high score feeling when you beat your best round. Nazi Zombies was a throwback to old and unforgiving games, and Black Ops 2 FUCKED IT ALL UP!

Now, my buddies were more interested in Do It Yourself hobby kits, building shields and devices to open doors than surviving as many waves as possible. The Easter eggs in previous zombie modes were just that: a hidden thing to be found. The storyline was similar; you had to piece it together off of eerie recordings and clues hidden throughout the maps.

Black Ops 2 zombies relied on gimmicks and the maps became far too complex. The primary objective used to be survive. Black Ops 2 turned it into “Give the retard candy so he opens doors.” (No, really. Black Ops 2 features a map called “Buried” and has a large giant creature that opens obstacles if you give him sweets.)

But fine, whatever, right? I’m just a guy who hated the new additions to the series, like every Star Wars fan. I can deal with that, but Call of Duty did something else that I find unforgivable. It put video games in the hands of the DudeManBros. DudeManBros are a species of human male, aged 16-30, that constantly call each other “dude”, “man,” or “bro.” They take video games to a new level of competitiveness, feeding their egos with killstreaks and triangular chips.

Why do you think Call of Duty is sponsored by Doritos and Mountain Dew? It appeals to slack-jawed idiots who buy the same video game every year, just like Madden fans. Now, the Madden fans play first person shooters, and all you hear on game chat is: “I just shot you fuckin’ faggot ha hah 360 no scope.”
Granted, not every sport game purchaser is an idiot. No, a fair amount of 8-14 year olds attribute to the overall abhorrence I feel when playing these games. When you just got home from work and a squeaky voiced pre-teen calls you a “fucking bitch,” you just- you just fucking lose it, alright?

(edit: 2017: Okay, maybe this was a little melodramatic, but there was a ring of truth somewhere in that garbage. I will say that, for all of the recent entries faults, Call of Duty has been making clear attempts to change it up.)