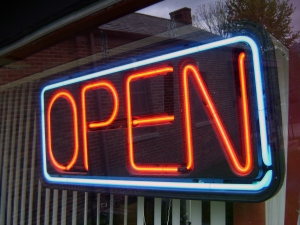 About a hundred people were lined up outside of Super-Mart’s doors. A battalion of cars were crammed into the parking lot, some pulled into the fire lane, others illegally wedged into handicap spots.

We ended up parking in the far back, near the patch of woods that hid the highway. I climbed out of Trent’s car, clutching a cup of coffee and shivering. November was a winter month in Michigan, and it was only twenty degrees.

We got in line behind an entire family. They were sitting on folding lawn chairs, each of them with a thermos full of hot chocolate or coffee. The two little brats looked like swollen sausages stuffed in snow suits. Mom and Dad were eating donuts.

Trent started talking to them. Of course he did.

He asked how long they’d been there (since midnight) what they were buying (three of the 42 inch TVs, they were going to sell two of them) what the kids names were (Philip and Sarah).

Their voices hurt my head, so I slurped my coffee and closed my eyes.

Around 4:15 a group of employees pulled  multiple pallets of large boxes outside. They parked them in front of the automatic doors.

One of them, the manager (he was wearing a blue shirt while the rest were wearing red) had a megaphone. “All right shoppers!” he called, “we’re going to start giving out the free doorbusters! The first one hundred people will get a free gift!”

“Alright!” Trent exclaimed. He punched me on the shoulder, grinning broadly.

I glared at him, thinking that I should yell that he was trying to cut in line, and let the family beat him to death.

The line moved forward, as the redshirt employees began handing out gifts. It appeared to all be sports equipment.

“Favorite sport?” I heard one of them ask a customer.

The employee grabbed a five iron, and told the customer to head in the store.

They repeatedly asked for favorite sport. Some people got full sized football helmets, baseball bats, basketballs. If you said you didn’t have a favorite sport, they gave you a cloth, reusable shopping bag. The line moved forward at an agonizing pace, customers bickering with the employees about the gifts.

Finally, at about 4:55, it was our turn. We shuffled up to the pallets.

“Favorite sport?” a redshirt said. He was about twenty, his hair was razor short, and he looked about three coupon questions away from snapping.

He looked at the box he had, then yelled: “Nick! Got anything for hockey?”

“Don’t really have one,” he replied.

The worker turned around to another pallet, and I heard him say to one of his coworkers: “Need another bag, got another pussy over here.”

I looked at Trent, but he hadn’t heard. He was looking through the ad again.

After he got his bag, we went inside.

Christmas music greeted us, “Jingle bells, jingle all the way,”. All the customers were grouped around the checkout area, waiting to be released into the store. Large posts with chains looped around them fenced us off from the aisles. People milled about, all of them chattering, asking what was going on.

There was something odd about the checkout counters. The registers, the stations where the cashiers would stand, were completely encased in thick glass, probably bulletproof. 16 rows of these boxes, each with a slot for customers to put money through. I opened my mouth to ask Trent if they were normal, but he jumped up and down, saying: “It’s almost five, it’s almost five!”

I saw Nick, the blue shirt, and his crew of employees abandon the pallets and scramble inside. Each of them had a white helmet with a face shield. They donned the helmets, and began unlocking and entering the register boxes.

I tried to ask Trent, who was swinging his little bag with glee, if that was normal, but the PA speaker clicked on.

“Attention Super-Mart shoppers! Welcome to our BIGGEST BLACK FRIDAY SALE EVER! Now, the ad was a little misleading. Those deals are not the real deals. LISTEN UP! For the next two hours, everything in the store is 95% off! That’s right! 95% off! Do whatever you must do get the best deals! Each of you has been given a weapon, as part of our doorbuster promotion!”

The crowd gasped, and began muttering amongst themselves. I was laughing, it was nice to see a retail store with a sense of humor.

The chains were unlocked by a group of redshirts, who scattered away like there was a bomb going off.

“The sale begins!” the PA called out.

At first, everyone was calm. We started walking through the store, everyone mock-brandishing their golf clubs and bats, chattering about how it was really funny, but kind of sick. I was laughing and joking too, but I was gripping my hockey stick a little too tightly.

One little old lady started it all.

Behind me, I heard someone cry out. I heard the wheels of a shopping cart, and someone yelled: “Old bitch!”

The old woman, standing about five-two, came barreling down the main aisle, colliding off displays, knocking things into her cart with her pink purse. She wore giant, square rim glasses and her white hair looked like a cotton ball on her head.

She zipped by us, wheels squeaking.

Then, someone said: “Devin, we should get to the TVs.”

People began sprinting, racing towards Electronics, towards Toys, towards Jewelry. I saw a woman get pushed down and trampled, a teenager whacked a guy in the leg with a bat, and ripped the Xbox out of his arms. I watched, breathless, as a man of about forty kicked a little girl out of the way to grab a pair of hunting boots.

There was a great crash from Electronics, and I pulled Trent to the side and craned my neck over the aisles. Six people were in a standoff by a skid of televisions. A woman, her husband and their son were brandishing hockey sticks and golf clubs, versus a guy with one of the cloth bags and two women wearing football helmets. I watched as the bag man lunged for a TV and began pulling away, only for the woman to scream: “Fuck you!” and hurl her stick at him. It hit him full in the face, teeth flying out and clattering on the ground. Blood spattered the white tiles, and people running past slipped in it.

The two women lowered their heads and rushed to tackle her, their heels clacking on the ground with each step.

“Hurry,” the husband told his son, and together they hefted a TV into a cart, and wheeled it off.

“What the fuck is going on?” I said. What was this pandemonium? People were fighting, biting, scratching and kicking over products, like animals fighting over a scrap of food. It was a melee of greed, a sale savagery, a blowout bloodlust, a clearance killing.

“Did you know about this?” I asked Trent. He shook his head, eyes bugging out of his eyes, his froggy face white with fear.

“Alright, we need to get out of here.” I grabbed him by the collar pulled him, intending to get to the exit as soon as possible.

Then I saw the DVD display.

They had movies for 3 dollars. What is 95% off of three bucks? Like fifteen cents?

Suddenly I caught the lust. I wanted those movies. All of them. Movies I already had, movies that I’d never wanted to see, Blu-Rays for a Blu-Ray player I didn’t have. I wanted it all.

I released Trent and heard him squeal and fall, but I was already sprinting away, running like a field hockey player.

People were ramming carts into each other, some had taped knives and rakes to them, and were using them to jab and stab other shoppers.

I dodged a flying board game (it was Trouble) and ducked under someone’s baseball bat swing.

There was a man lying unconscious in front of the display, blood dripping from his temple. I scooped up his bag and began stuffing DVDs in it. Dances With Wolves, Sin City, Narnia, Good Will Hunting, it all went into the bag. I was a trick or treater, give me the candy or die.

“Excuse me?” someone said.

I looked around and say the old woman who had started this shit. There was blood in her hair, her glasses were broken, and one of her ears were a shredded mess. She still had her cart.

“I think you put the last copy of Despicable Me into your bag. That’s my grandson’s favorite movie. Might I have it?”

“Fuck off lady,” I snarled. I turned away, and began scooping up DVDs even faster.

Behind me, the old woman was getting ready to charge. She put on a football helmet and snapped the strap closed. She backed up her cart, and began twirling her purse.

I heard the wheels squeak and sidestepped her charge. The cart slammed the cardboard display, knocking it off its supports, movies spilling everywhere.

The woman abandoned the cart and ran at me, digging her head into my gut.

“Oof!” I uttered, and I was pushed back, pinned against a rack of coats.

I began whacking her on the head with my hockey stick, the wood clanging against the plastic. WHACK WHACK WHACK! I realized I was screaming, words punctuated by whacks to the head. “Fucking!” WHACK! “Stupid!”WHACK “Lady!” WHACK! On the third hit she fell to her knees, and I kicked her in the chest. She flew back, her slippered feet swinging up into the air.

I ran, clutching my bag of goodies. I hopped over a body, dodged another cart rammer, shouldered a guy out of the way. A hardcover book clipped my cheek, and I could feel blood. I didn’t slow down.

I got to the registers, and the fighting here was worse than electronics. Blood coated the glass cages the cashiers were in. I watched as people body checked each other against them, ripped products out of each other’s hands. Money was jammed in the slots, the cashiers just pulling money in, not bothering to count. I think some people payed well over the price, because they’d throw a fifty in the slot and run, clutching a $200 tablet.

But EVERYONE was paying. No one thought to walk out the door. I couldn’t fathom that. If you’re ready to assault someone over an Ipad, why not steal it?

Then I saw why. Lined up at the door were employees; all wearing white helmets and clutching shotguns. A man in a green coat ran at them, trying to avoid the checkout massacre, and he was shot by four different barrels.

I decked a young woman with my stick, and slid a ten under the slot.

“Have a nice day!” the guy in the box said. He handed me a receipt, and I waved it at the guards.

I walked to the doors and the gunmen stepped aside. I heard screaming, I heard roars of fury, I heard wet meaty sounds of flesh meeting metal bat.

I heard “Have a holly jolly Christmas, it’s the best time of the year!”

I walked out, gripping my purchases.

There was still a huge line outside, people waiting to get in.